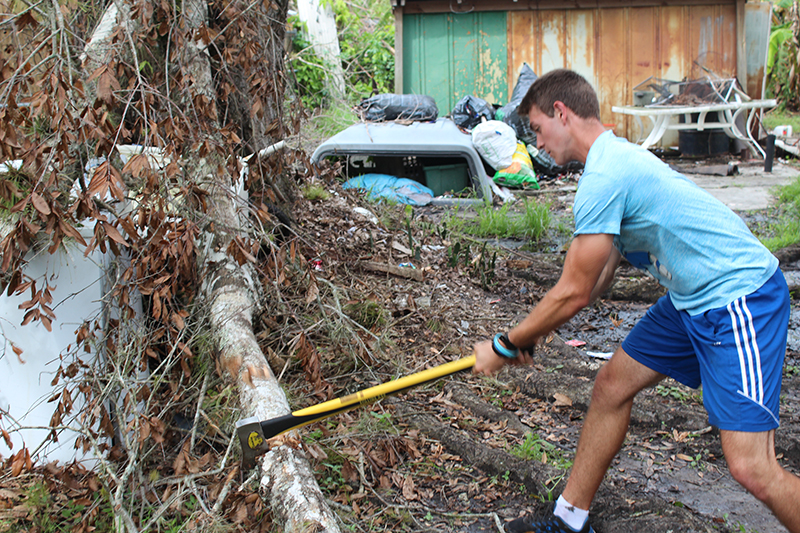 On their sixth day in Florida, the 13 International Relief Friendship Foundation (IRFF) volunteers were once again focused on house-to-house outreach and needs-assessment in the town of LaBelle. The houses in the low-income neighborhood suffered from major damage after Hurricane Irma but the people were very open hearted toward all of the volunteers.

The volunteers met an elderly Hispanic woman who was sweeping the street who was curious about the work they were doing. The volunteers told them about IRFF as well as True Parents and their ultimate goal of unifying the world  to create one family under God. She was inspired and encouraged the young volunteers to continue having the heart of serving God and His children wherever they go.

With that determination they continued assessing and after lunch and a discussion on their experiences they went back to some of the households to see if they could provide any service to those in the neighborhood. They moved the branches and debris, piling leaves and clearing away the residues of fallen trees.

The last house the teams went to visit that day was the home of Mrs. Ramirez, a warm-hearted and kind woman. One of the volunteers, Kana Ishii, was able to have a special experience meeting this woman.

“As some of the volunteers were helping clearing a tree that broke and was dangerous in her backyard, I asked her about the house’s situation. It started as a normal conversation that I would do normally to a person I would assess, but as I was talking to her she started opening up,” says Kana. The volunteers learned that, though she had been living in the America for more than 15 years, she still wasn’t able to speak English very well, limiting her ability to express herself to others.

She shared in tears about the difficult times she faced and her present struggles with raising her sons, dealing with the post-storm house situation, their financial situation and several other challenging factors in her life. After sharing this with Kana, with a strong and determined voice, Mrs. Ramirez said: “Even though the difficulties seems endless, I know that God is there with me. God will never abandon me and that is why I can keep going.” Through Mrs. Ramimrez, Kana realized that many who were suffering a lot and facing challenging lives, have hearts that sense sacrifice and gratitude unlike many others because they center their life on God.

After taking a picture and saying farewell to her, Mrs. Ramirez thanked each volunteer in the group not just for the external support but for being there for her during one of the most difficult times in her life. The volunteers felt deeply that they were helping people more than they sometimes thought and were able to give more than they could often see. “The support we can offer externally is very important but more than that the heart we have towards the mission, the people and towards God and True Parents is what ultimately makes biggest difference and impact on the people,” said Kana.

At this time we are in need for more donations to support our volunteers. A $50 donation will support 1 volunteer for 1 day. Every little bit helps!