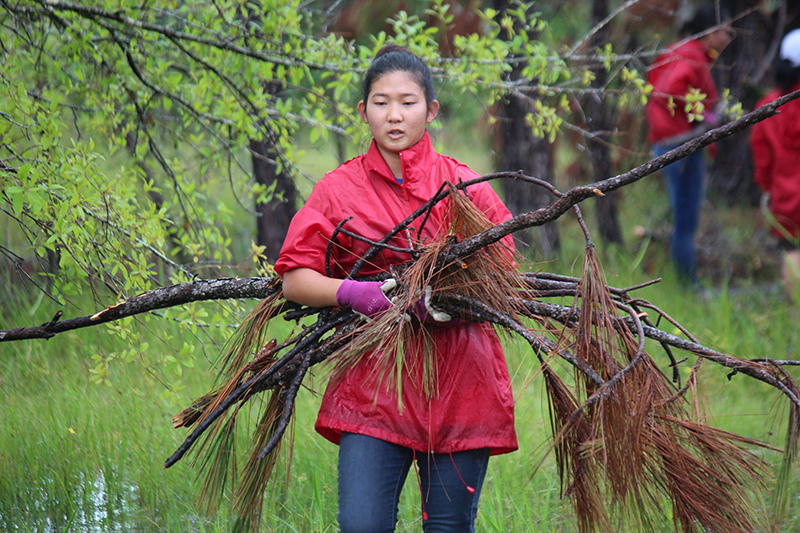 Written by Editorial Team on October 9, 2017. Posted in Blog.

On their fifth day in Florida, the IRFF volunteers split into two teams in order to maximize the amount they could help each person or family that needed their support. Below, a participant from each team recounts their experiences from another day of supporting those in need in LaBelle.

Nine of the IRFF volunteers had the opportunity to visit the household of a wonderful woman named Marie, who lived in an area just on the outskirts of LaBelle. Marie’s friend had expressed to us her need for support and introduced us to her. She had her doubts that we would be able to help her with the damages she’d incurred from the storm, so she was reluctant to ask for help herself, but the team came to help out anyway, with willing and giving hearts, ready to do whatever they could to help.

A majority of the work consisted of clearing away debris such as large branches and a few fallen trees that had covered her property as a result of the strong hurricane winds. Though it was a seemingly a small job, it required the full dedication of each volunteer on site. Marie even came out and joined us, doing just as much as she could, just like the volunteers.

The volunteers worked in areas that were still flooded, with water coming up to their knees. We faced mosquitoes in the tall grass while rain continued to pour onto them. But nothing could stop them from helping Marie. We wouldn’t stop working until they had done everything they could.

It was definitely a team effort but we were able to get it all done. All the hard work was worth it to see the smile and shining eyes of Marie when we gathered to depart once the job was done.
Before leaving, the group asked Marie for a comment on her overall experience and with a warm smile she stated, “All I can say is that I’ve been blessed. God has blessed me today….You guys were here when I needed you.”
She showed a heart of gratitude and love toward each of us, giving us not only words of affirmation but also a box of snacks as a donation to the hardworking team.  Marie strongly expressed her desire to continue connecting with the volunteers as they move forward in their storm-relief efforts and activities.

Today, four people were able to go back to the home with the tree in their yard and help remove it. They were ready and prepared with their chainsaws to get the job done. Right at the start of the day they had troubles with the chainsaws. The team decided to go to Ace hardware to get them fixed. They went up to the cashier with the chainsaws but the cashiers were so confused and could not help them. As they were leaving the store empty handed and with broken chainsaws, a man in front of them told them, “Go over the bridge and to the right of the golf cart store.”

If the team came even a minute earlier or later, they would not have met this man and found a place to fix the chainsaws. The team followed the directions of the man and went across the bridge and to the golf cart store. Here they were able to meet two hardworking men willing to help fix our chainsaws. The team was able to explain why they are in Florida providing service to communities. The two men were very moved and inspired by this that they fixed the chainsaws for free.

After this whole experience the team ended up going back to house and were able to clear up the tree with the fixed chainsaws. By the end of the day the whole team was able to see how God guided them in fulfilling their mission. They could have easily given up and left the tree because the chainsaws were broken. They persevered, however, and had determination to help this family.

At this time we are in need for more donations to support our volunteers. A $50 donation will support 1 volunteer for 1 day. Every little bit helps!